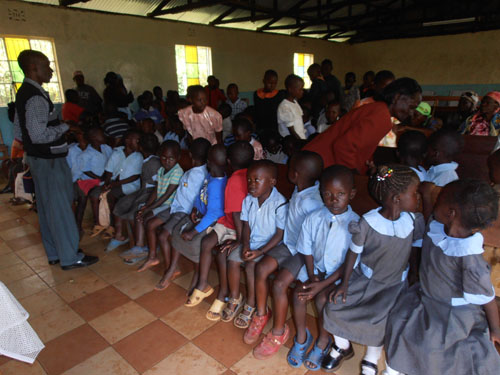 Grandma with one grandchild. She is so happy that the doctor give medical assistance.

At this year’s “medical camp”, 265 children and adults were examined by 2 doctors and four nurses and received immediate medical care.

Thanks to the perfect organisation by our coordinator, Recky Awino, all of the nursery and primary school children sponsored by hope (92) were seen by the doctors.

Subsequently, the medical team examined all of the people in need from Mbale. Some acutely ill people actually had to be carried by the doctors because they were too weak to be able to get to the medical camp by themselves. Some of the children examined were suffering acutely from malaria.

Malaria is unfortunately still the most common cause of death (if timely medical treatment is not provided) especially amongst pre-school children in southern Africa. The medical care was provided in the church, which was provided to us by the pastor. The entire medical camp (fees for the doctors and nurses, medicine and wound dressing material) could be financed by the generous donation made by Mr Horst Metz from Karlsdorf-Neuthard. On behalf of all of the people cared for by us in Mbale – in particular on behalf of the children –, hope would like to thank Mr Metz for this generous donation, which allowed 265 people to receive medical treatment.